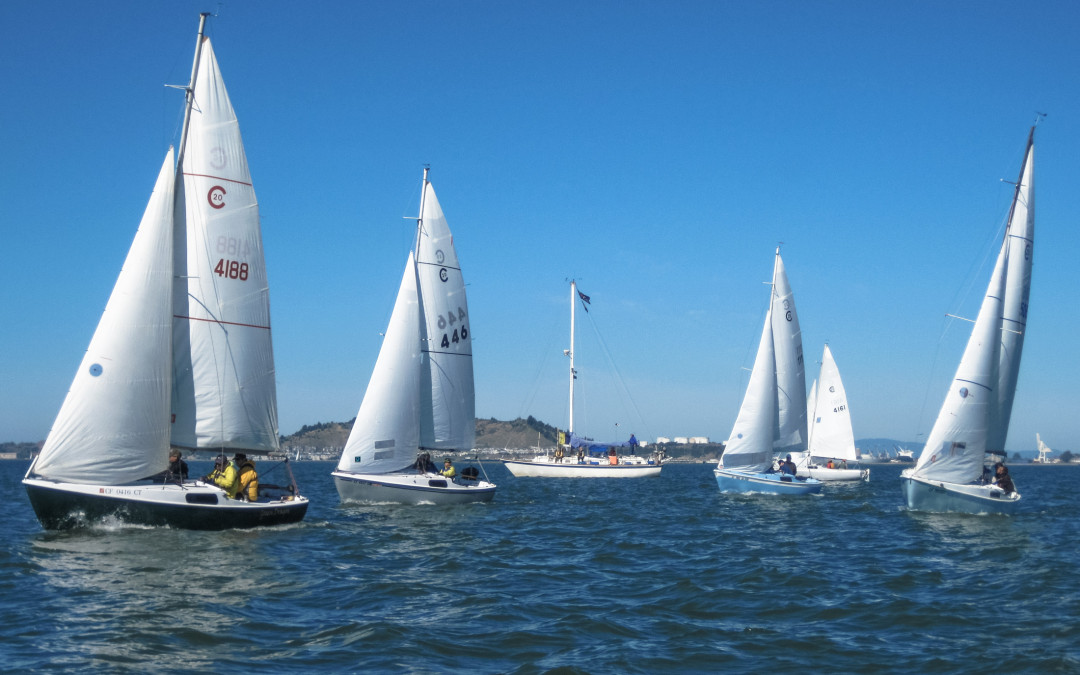 via Richard vonEhrenkrook, Can O’Whoopass, 624
So, let’s talk about covering, and I’m not talking about breeding Thoroughbreds. Or, maybe I am…

If you get a good start, always look back, to see what the fast boats are doing. We tend to get good starts, more often than not, but it is easy be lulled into visions of glory, while ignoring the obvious avenue to being first at the weather mark, which is what you want, especially if it is a separator. That is, a mark that is up-current, allowing the first boats around to leverage their advantage to two times the distance, or more. That situation played out for Sally and Ted on Just ‘Em in the January CYCs, and for Captain Snow on Raccoon in the BYC’s this last weekend, both of whom led at the top mark, and doubled their lead, with the current pushing them, as the rest of us struggled to make the rounding.

On a course where the current is flooding parallel to the W/L marks, it’s almost impossible to pass on that kind of course; the rich get richer, and the poor get poorer. You could have been fifth or sixth off the line in the CYC Mids, but if you had tacked to port when Just ‘Em did, you would have been second at the windward mark, ahead of the Coon and the Can, who played stupid domination games on starboard, to their detriment.

All Eyes on the Water

Everyone on your boat needs to be a pair of eyes on the water, whether you sail with two, three or four on board. The driver can only process so much, without taking her/his visual focus off the driving. With quality input from the other eyes on the boat, the driver can focus on making the boat go fast, which is the driver’s job, but can also create a mind map of the competitors on the course, allowing for her/him to maximize boat performance prior to the tactical move that puts them ahead, or keeps them ahead.

Leaving the last leeward mark in last Saturday’s BYC Mids, Magic Bullet, in 2nd place had about a 75 yd. lead, and headed off on port, with the ‘Coon safely ahead of both of us. After checking how far back the 4th place boat (Green Dragon) was, the Can initiated an attack by tacking to starboard. There was a bit more pressure on the
left side of the course, so we were pretty sure the Bullet would come out to play, and they did. We tacked back to port, and Bullet crossed about 50 yards ahead of the Can, tacking on the nose, as the Can immediately went back onto starboard. There were two more of these crossings, with the Can studiously caring to keep the game
outside the port layline to the finish. One can play that game all day long, and it usually results in the gap closing on the lead boat, as they are reacting, and the attacking boat is picking the best spots to tack.

The attacker only has enough course, however, to continue the tacking duel until they either:

Bullet’s last tack was only a boat length ahead of the Can on Saturday, but aside from driving up their blood pressure, it was game over, once they could fetch the Finish Line.

The best defense, as the lead boat, say, coming off the leeward mark on port, is to tack to starboard, to get directly upwind of the following boat AS they round the mark. It might not comport with your best reading of the course strategically, but it immediately puts your boat between the attacker and the next mark, and limits
their options early thereafter. You can just lead them off on any tack they choose. If they then continue the attack, you aren’t going to be caught outside the Box if/when they get close enough to engage in overlapped racing, and you will always be on their wind.

The only caveat is to keep an eye on the boats behind the attacker, because they are salivating at the prospect of the two dueling boats taking multiple extra tacks while they cruise into the lead…

Best wishes to all in the CYC Midwins next weekend!