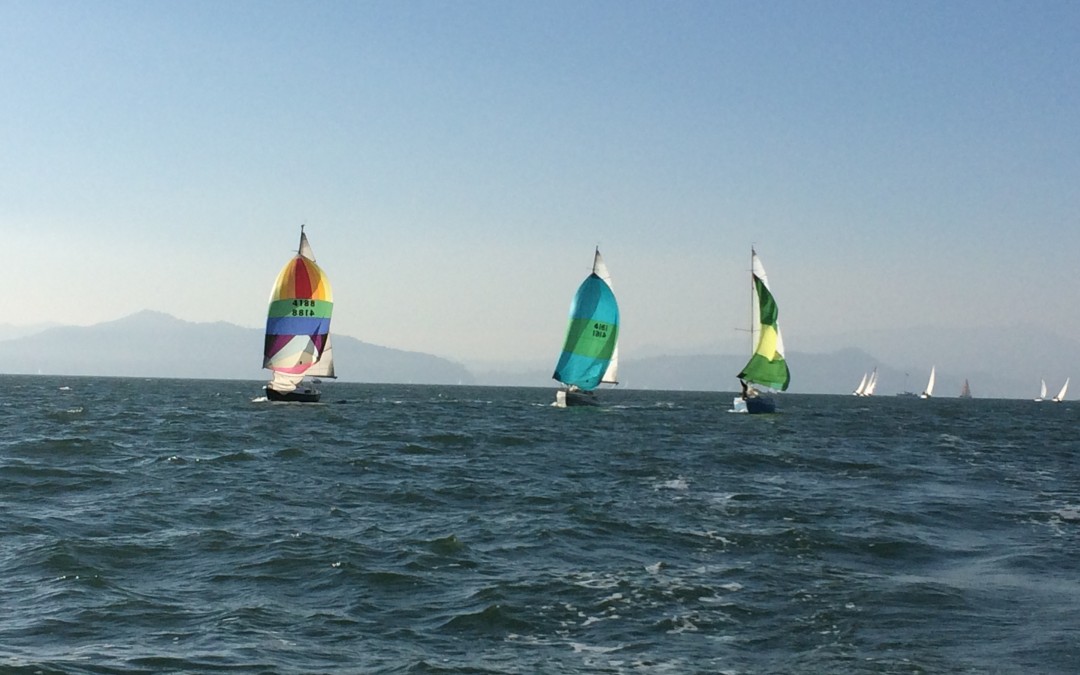 Saturday showed an enjoyable increasing tendency to get into it at the start.  The BYC RC called ours the most interesting.  With the 1- minute noise imminent, Raccoon and the Can were doing a double circle at the stern of the RC.  The ‘Coon should have done another tight circle, and they would have been in control of both the Can, and Invader.  Invader, marginally closed out by the Can, chose to do a tight pirouette, and still was tight in 2nd going to the 1st mark.

As you turn downwind, and you find, or knew all along, that you have the spin gear on the wrong side, consider the Garbage Set.  If it’s a bear-away set, and your gear is on the high side, you sail deep for a moment, while your crew takes the laundry outside the uppers, to the bow.  Halyard first, then take up the weather side (afterguy) spin sheet, as the crew sets the pole to the guy, then the mast.  Jib down, and you’re on your way.  If you really need a jibe-set, then send the boom first, then crew forward on the new weather side.  Same drill.

The benefit of the Garbage is in the ability to be going the right direction immediately, versus doing a set, jib down (in the wrong direction), and then jibing, in the bear-away situation, or worse, having to jibe, set, jib down(all going the wrong direction), and then jibing to the right direction.  Both of those alternatives are slow, and take you away from immediately heading to the next mark, which is what you should be about.

If we have time, we send the gear around, from the cockpit.  We launch and retrieve the kite in the Companionway hatch.  If we have to alter symmetry, we make a triangle of the shackles, and hoist the spinnaker halyard to about 8’ off the deck, and fling it forward around the spreaders.  The bundle is then easily pulled around the forestay, the halyard is dropped, and the bundle is reattached to the kite on the proper side.  This can easily be done starting from the leeward or weather side, so don’t worry, just do it.

The Can blew off a 200 yd. lead by not covering, when two boats behind caught a 20-degree wind sheer, going back to weather.  If you are ahead, you must stay between the competition and the next mark, even if that conflicts with your reading of the course.  If you KNOW you are sailing to a heading shift, then to tack, ok, well, do it.
But anytime otherwise, when your competition rounds the leeward mark and follows you, you should tack to the inside of them, and lead from the inside, staying between them and the next mark.

Never fall into a position.  Always look to leverage yourself up in the fleet.  Late in the race is always a time to gain a place or more.  Try to think 2 to 3 moves ahead, and look at the logic of what you would have thought to do in light of what is happening.  When racing, the one who makes the fewest mistakes, and is ready to take advantage when a competitor does make one, is most likely to have the day.