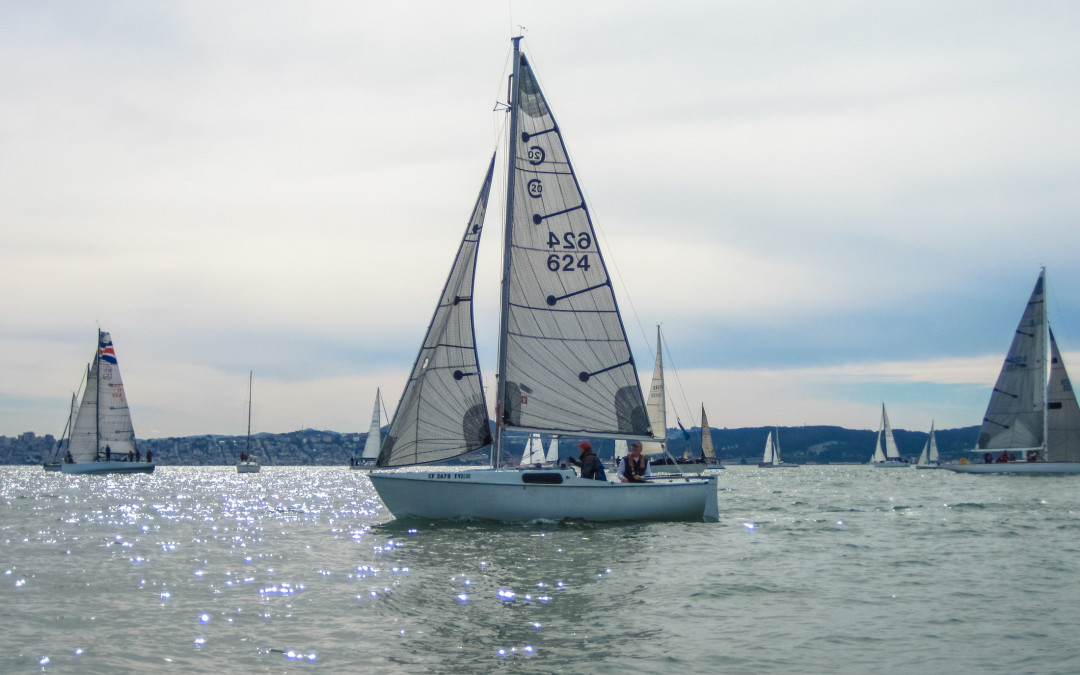 “#624, over early!  #4161, over early!”  Words you do NOT want to hear, for sure, but how do you recover quickly?  This issue of the Corner is about fouls, and how to minimize their impact on your race, and as well a digest of how the RRS treats these issues.

Meaning On the Course Side, and refers to what we all think of as”Over Early”, when any portion of your vessel is across the StartLine prior to the Start signal. If any boat in the fleet starting is in violation, it is the job of the RC to immediately sound a second horn, gun or other sound (this is the determining factor, and is REQUIRED of the RC), and raise the Answering Pennant, which is a rectangular white flag with a blue cross running to the edges.  The AP will then become the controlling signal, held aloft until all OCS boats have cleared themselves, or until the One-minute signal for the following fleet, if there is a rolling start sequence.  The RC may, at their discretion, radio sail numbers, clear boats that have gotten back on the pre-start side of the line, and otherwise be informative, but their ONLY obligation is to sound a second signal after the Start signal, and keep the AP up until the times mentioned above.  The RC has the only jurisprudence in this foul, and if they follow procedure, it cannot be disputed.

There are three possible conditions that are imposed on a OCS boat. Most often, it requires you to get all of your boat, including any appendages, fully to the pre-start side of the Line.  If the “India” flag is up, you will have to go around any end of the Line, either the pin, or the Committee end, before restarting.  In some rare cases, you will be told to not come back, but continue racing, and take a time penalty on your elapsed time on the course.  If the “Zulu” flag is flying prior to the Start, and you are OCS, go get a drink at the Club, ‘cuz you’re done.  Read your Sailing Instructions!!

If you get called, look to leeward, because your best bet is to bear away, maybe jibe, but to make a beeline to the Start line, preferably perpendicular to it, but taking into consideration the current. Ideally, you want to bear away, as that increases boar speed, but do what you have to do to immediately get clear of the other competitors, realizing that you still are under the RRS, and get back to the pre-start side.  Coming off your restart, if there is no obvious course to the first mark, go counter to the pack, to get clear air, and reassess your plan to get back in the race.  The Can got back in Sunday’s race by picking a current-neutral spot to tack inside of the fleet, found some pressure, and were back in the race by the weather mark.  If you aren’t OCS every once in awhile, you aren’t a competitive starter, so don’t kick yourself in the ass, just get back on it!

If you read the Protest Committee Guidance section of the RRS, you will see that their guidance as to any Course Foul that is protested requires them to make the following inquiry, based on this assumption: Think of an infinitely long string, extending behind your boat’s trailing edge, as you work your way around the course.  Did the boat complete the course, such that if the string was pulled taut, it would remain outside all of the marks of the course, in the rounding direction specified in the SI’s?  There are several issues that this raises, but I will assume we all sail the Course as defined at the Prep Signal, and confine myself to a discussion of Restricted Areas.

There are, as noted in the SI’s for any given Race, Regatta, or Series, areas of the Course that are Restricted, that is, areas that may not be passed through while sailing the Course.  They come in two flavors:

There are, as long as I have been sailing on San Francisco and San Pablo Bays, the following NO GO ZONES:

If you find that you have violated a Restricted Area, unless String Theory does not apply (once again, read the SI’s), you can back out by retracing your steps that led onto the Restricted Area.  Remember, that once the string is pulled taut, you can’t be found to have been in any of those areas.  Pt. Belvedere is sometimes restricted.  The Pt. Pinole stanchion has at times been restricted.  Read the SI’s!!

If you hit any Mark, other than a Starting Mark, but otherwise round it correctly, do a 360-degree turn, including at least one tack, and one jibe, and get on with your race.

If you are fouled, or do foul another Racing boat while Racing (even if they weren’t in your fleet, or even if they weren’t in your regatta), here’s the basics:  If you feel you have been fouled, or observe a boat in your race fouling the course, it is your obligation to IMMEDIATELY inform the offending vessel of your intent to Protest, by voice, or VHF radio, using the Race Com frequency (try VHF 16 to hail if you get no response, but don’t clutter 16).  You must also IMMEDIATELY fly the BRAVO flag, a seriously visible red rectangle. If you do not immediately do both of these things, your Protest may be thrown out prior to any hearing.

If another boat calls you on a foul, properly, as stated above, you have two options:

Of course, I do not wish any of these scenarios on any of you, but a good knowledge of the issues raised gives you a leg ahead, should the unfortunate strike.